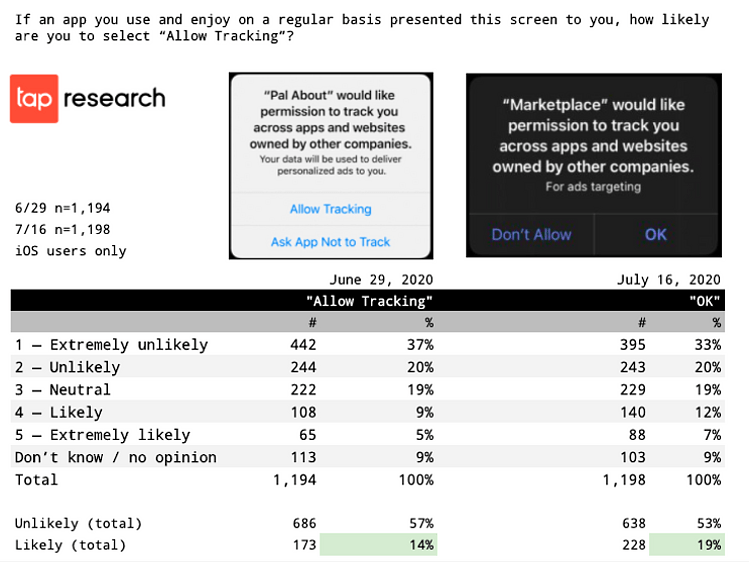 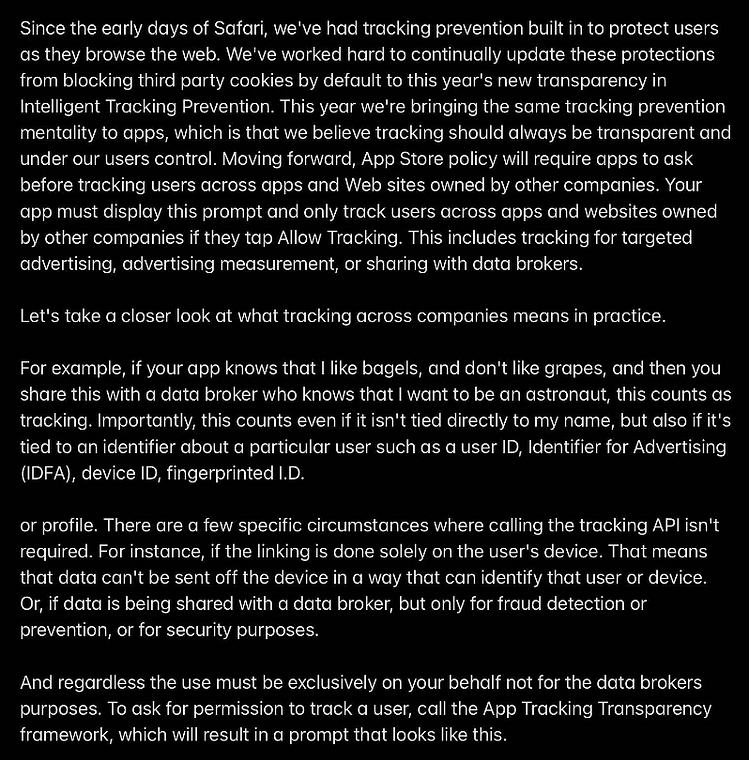 Some of the attribution companies have been trying to calm their customers by saying that they will fall back to “fingerprinting.” You are rightfully working hard to block this option. I’m sure that naming probabilistic device tracking as “fingerprinting” did not help ad tech get on your good side, and I’m not surprised why you specifically addressed this point in your presentation.

You did throw a bomb onto the ad tech industry. Companies are stressed about how they will adapt to the change in such a short time. It is funny seeing the mixed opinions, views and announcements by tracking companies that are attempting to spin the story positively.

But my favorite was the attribution company that announced it offered granular attribution compatible with iOS14,” only to later say its approach will require users to agree to access their IDFA. If users agree, it’s magic.

Apple, you are, again, triggering a change – a change for the better. The advertising industry needs a reset.

(This was originally published on Adexchanger.com)

INCRMNTAL is an incrementality testing platform providing ammunition to the digital marketer. The platform uses machine learning and AI to provide incrementality and cannibalization actionable insights acting as a strategic tool to unlock the value of your marketing budget.

(For Sending Our Industry Into Chaos. Again)

During the last WWDC conference you threw a bomb and put the in-app performance marketing world in flux by making the ID for Advertisers (IDFA) opt-out by default in iOS 14. This will give users the option of making a conscious choice about sharing their data.

The coming change poses a much needed paradigm change in the industry.

The obsessive “deterministic” approach of real-time funnel optimization – which led to an influx of fraudulent publishers – will give way to a world where advertisers can better understand if what they have been doing is the best value creation for their buck.

Many players in the ad tech and marketing technology industry were caught off guard by this change, though you did put the writing on the wall (or, to be specific, on webkit). If there’s one thing I know about you as a company is that your employees don’t share their opinions publicly unless they fit into the company’s strategy.

You did get many networks, advertisers and attribution companies wondering: How do we track the performance of our campaigns now that we don’t have a deterministic user-level identifier?

The notion of “deterministic” performance attribution as we knew it for the past eight years has been a hoax. Most know this, but it was much easier to just accept the status quo. And you at Apple are really good at changing the status quo for the better. Just look at the iPod, iPhone and iPad as examples.

Uber was the perfect example to how attribution has been a hoax. Uber is a mobile-first company that used deterministic attribution based on user-level data, analytics and so on, and it later found out that 80% of its ad spend – more than $100 million – was just cannibalizing its organic new users. Uber is just the tip of the iceberg for companies that believe they are making data-driven decisions based on wrong information.

Had you not provided any alternatives, I would have thought you seriously had something against the advertising industry. The first version of SKAdnetwork launched March 2018 was not great. It provided almost no granularity, and I’m assuming that adoption was almost non-existent.

SKAdNetwork 2.0 is a large improvement, and while far from perfect, it creates a well-guarded environment where advertisers can regain trust in their ad spend with no need for third-party attribution to guesstimate who should get credit.

There are still open questions and suggestions on how to improve SKAdnetwork 2.0. I hope you read this and make 2.1 or 2.01 or 3.0 better.

SKAdNetwork still gets something wrong: 100% of attribution credit goes to the last click. That means that a user watching a video ad on addressable TV, listening to an audio ad on Spotify and seeing a full pre-roll ad on YouTube but ends up clicking a tiny button ad on random app will get credit. I’m assuming that you know what any first-semester marketing student learns: Getting the user to perform an action is the result of a marketing funnel.

The response from the legacy platforms seems mixed.

The popup screen you showed at WWDC had people scared, but the iOS14 beta shows a more neutral message to users. Some have claimed that the user opt-in rates will be very high, and some doomsday scenarios say only 1% of users will opt in to share their device ID for advertising.

Michael Sprague from Tap Research ran a survey with 1,200 users for both versions of the popup and came with similar results: Less than 20% said that they will likely click “OK.”